“What we love” gives you a fresh look at your life – with pen, paper and your treasures.

It is a project that is open to everyone.

And what is in your cupboard or in your attic?

We occupy ourselves with our treasures

that are either hidden in a cupboard or in a box or you put them quite obviously on the windowsill or on the mantelpiece, as e.g. grandma’s vase or Opa’s cigarbox.

We occupy ourselves with our treasures

that come from your past because they are close to your heart: from the special photo to the sea shell from the first holiday without your parents.

A young women that is just moving in to her boyfriend looks into the already filled cutlery crawer because he has already moved in.

She grabs the knife and carries it into his room. He’s sitting at his desk and looks up interested.

He turns to her. She shoves herself carefully between his knees and holds the the small knife with the dwarf on the handle in front of his nose.

“Guess what, I’ve the same cutlery!”

“That’s great!” He said and smiles on.

“Isn’t that coincidence? When does someone get such things?”, she asks.

“Possible. Do you know who gave it to you?”, she asks on and still looks at the knife quite fascinated.

“No… is that important?”

She smiles and says: “It’s just important that both come together.” 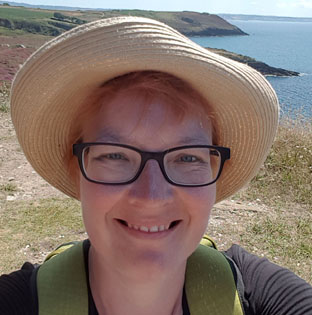 I’m Ulrike Miesen-Schuermann, fine artist, tutor and full of ideas for me and for you. Some times just a word or a picture is needed to take us to old and new worlds, where we have collected and still collect treasures: little gems, places and memories – with a whole lot of love. Let’s get out these apples of the eye and brigthten our world!

when you got stuck or

you need a new idea

To get some more infos and a newsletter from time to time...